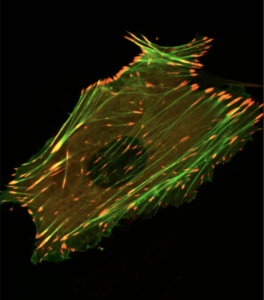 CSB Professor Sergey Plotnikov has been awarded XSeed funding to identify protein targets that can accelerate wound healing.  The XSeed program catalyzes cross-disciplinary partnerships between investigators from the Faculty of Applied Science and Engineering and other faculties.

The grant was awarded in collaboration with Professor Fernandez-Gonzalez from the Institute of Biomaterials and Biomedical Engineering. Plotnikov and Fernandez-Gonzalez will leverage their expertise in wound repair and cell mechanics to probe the mechanisms of cell movement to the site of wounding.

Animal cells are embedded in an extracellular matrix (ECM) and protein interactions through the ECM allow cells to maintain their shape and structure. Cells adhere and migrate through the ECM using multi-protein structures called focal adhesions. Plotnikov and Fernandez-Gonzalez will examine the dynamics of cell-ECM adhesions after wounding.

They will investigate how talin, a core protein in focal adhesions, allows cells to move to the site of an injury, thereby closing the wound. Wound closure in talin mutants with either weaker or stronger ECM binding will be compared to normal talin. Wounds will be induced through laser nanosurgery, and the accumulation of talin and the assembly of focal adhesions at the injured site will be recorded using cutting-edge spinning disc confocal microscopy. The results of this study will establish whether talin-based cell-ECM adhesions that allow cells to move are required for wound healing.

Adult wounds heal much slower than embryonic wounds and often result in scarring and infection. By studying cell-ECM adhesions and wound closure in fruit fly embryos, Plotnikov and Fernandez-Gonzalez will be able to identify components of the protein pathway that can be modified with the goal of accelerating wound healing in adults.