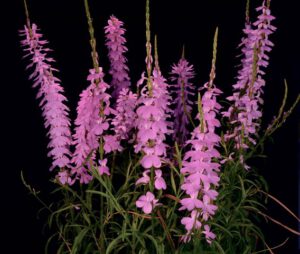 The crop fields of sub-Saharan Africa have fallen under a spell cast by the witchweed Striga hermonthica. Every year, this parasitic plant targets and destroys over eight billion dollars worth of staple crops, leading the UN to declare Striga infestations as a major impediment to poverty alleviation in Africa. A new discovery from researchers at U of T could provide tools to prevent Striga seeds from germinating in farmers’ fields.

Striga’s success comes from its ability to lie dormant in the soil for years, lying in wait for a crop host to infect. When a host plant begins to grow, it emits a small molecule called strigolactone into the soil.  This chemical acts as a cue for Striga to germinate, telling the parasite that a host is nearby.

Due to its parasitic nature, studying Striga in the laboratory is challenging. Plant scientists use the model plant Arabidopsis thaliana to study germination but unlike Striga, Arabidopsis does not germinate in response to strigolactone. Professor Shelley Lumba’s lab in the Department of Cell & Systems Biology (CSB) decided to learn more about the action of strigolactone on germination by expressing Striga’s strigolactone receptor protein in Arabidopsis.

As the results came in, excited discussions arose in the hallways of CSB and at the coffee stand, provoked by the surprising revelation that strigolactone could trigger germination independent of Arabidopsis’ dominant germination pathway.

Normally Arabidopsis seeds (and crop seeds) don’t germinate in storage because of the activity of a group of proteins called DELLA domain repressors. When these seeds sense enough water and warmth, their cells produce a hormone known as gibberellin that enables breakdown of DELLA proteins, kickstarting the process of germination. Lumba found that activated Striga receptors in Arabidopsis circumvented gibberellin to cause germination.

The signal that bypasses gibberellin takes an unexpected path from the strigolactone receptor through the cellular KAI2 protein, which had no previously known receptor partner. The KAI2 signaling pathway inactivates the SMAX1 protein to allow germination even in the presence of DELLA repressors. These details, revealing how Striga strigolactone receptors act as the dominant signaling component in parasitic plant germination, will refine the methods used to prevent the growth of these devastating weeds.

The approach used by the Lumba lab shows that receptors for known hormones can be adopted to analyze orphan receptors, which may have broader utility in understanding hormone signaling in both plants and animals. These results were published in a recent Nature Plants article: “SMAX1-dependent seed germination bypasses GA signalling in Arabidopsis and Striga“.