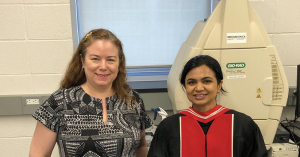 The Mitchell laboratory has revealed the very first step in mouse stem cells turning into the organs of the body. Precise experiments by Dhaliwal, Abatti and Mitchell expose the stability of the KLF4 protein as crucial to KLF4’s ability to activate genes. These findings implicate protein stabilization as a major factor in maintaining control of the stem cell state.

While many previous studies focus on the genes that are turned on or off as stem cells become organs, this study uncovered new mechanisms that initiate differentiation, a process required for organ formation. These mechanisms cause breakdown of the transcriptional activating factor KLF4, releasing stem cells from their immature state.

KLF4 protein binds DNA along with many other proteins to form a complex that activates stem cell genes. Dr Dhaliwal’s experiments reveal that KLF4 protein is extraordinarily stable, and this stability is maintained 1) by interacting with other proteins, 2) by binding DNA and 3) through stimulation by signals that prevent stem cell differentiation. When the stimulating signal is disrupted, KLF4 pulls out of the complex, moves away from the DNA and is broken down in the cytoplasm. Interfering with KLF4 protein breakdown prevents stem cells from differentiating to specialized cells, indicating that KLF4 breakdown is a critical step in beginning the process of organ formation. These findings have important implications for regenerative medicine as building new organs requires a detailed understanding of how stem cells become organs.

The insight for this set of experiments came from an unusual observation in the Mitchell laboratory. While studying enhancers – regions of the genome that act like a dimmer switch to increase or decrease the levels of a gene that are expressed – the Mitchell lab found that eliminating a switch for KLF4 decreased gene expression 17-fold, but surprisingly the levels of protein made from that gene were barely affected. In trying to get to the bottom of this unusual observation, the role of KLF4 protein stability was revealed.

Beyond its role in stem cells, KLF4 is also involved in numerous cancers. The researchers suggest the mechanisms uncovered here may shed light on its role in the development of breast cancer, squamous cell carcinoma and gastrointestinal cancer.

The data they present highlight the importance of studying both gene control and mechanisms that affect protein abundance. Furthermore, this is the first time that transcriptional activating factors have been shown function cooperatively through protein stabilizing mechanisms. These mechanisms are particularly timely to keep in mind as more and more work shifts to a focus on studying gene transcripts – even at the single cell level – since these transcriptomic techniques would not reveal mechanisms that rely on protein stability.

You can read more about these results in the paper: KLF4 protein stability regulated by interaction with pluripotency transcription factors overrides transcriptional control and on the Faculty of Arts & Science website